Managing the region and the nation’s waste is a large and growing problem. Historically, trash was thrown in dumps, discarded into rivers, and buried in landfills. For a while that was okay since most of the waste was organic and would eventually decompose. But the nature of waste has changed and, even though landfills have been updated to include a lining, these man-made mountains of metal, plastic, concrete and other synthetic materials leach toxic chemicals into the soil and groundwater and emit harmful methane emissions into the air.

Many towns and cities have also turned to incineration. Burning trash in “waste to energy” facilities was once thought to be a good solution. Some communities burn their trash and generate a small amount of electricity in these facilities. While that may sound like a solution to a couple of problems at once, “waste-to-energy” incinerators are neither efficient, clean, or renewable sources of energy. These dirty incinerators emit harmful air pollutants like mercury, cadmium, lead, and dioxins. They also generate toxic ash — lots of it!  These pollutants get into our lungs, our soils, and our waters. 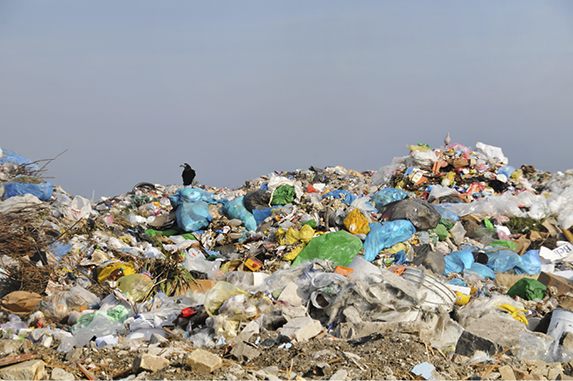 Incineration of municipal solid waste is also an environmental justice (EJ) issue because most of these facilities — 80% of them in the United States — are located in overburdened communities of color. In New England, three of Connecticut’s five incinerators and six of the seven located in Massachusetts are in EJ communities. Rhode Island has a ban on incinerators of this nature but many of its landfills, transfer stations, and recycling facilities are located in or adjacent to EJ communities.

Across New England the residents that have suffered from this preventable pollution continue to push to shut these polluting sources down.

Cities across the country and the globe are adopting Zero Waste policies to significantly reduce waste at its source. While there might always be some waste, the goal is to avoid it as much as possible and to recover, repurpose and reuse every other piece of discarded material. Sorting food scraps/organics, improved sorting of recyclables, glass, paper and other products, and extended producer responsibility (EPR) policies that give the manufacturers of these products that will eventually end up as waste incentive to make them reusable or recyclable are key components of Zero Waste strategies.

Adopting these policies at the local and state level will significantly reduce the amount of waste going to incinerators and filling landfills and ash disposal sites. Clean Water Action is campaigning in Massachusetts, Rhode Island and Connecticut to implement policies and programs to radically reduce our waste and shift to more sustainable solutions, including creating state and municipal zero waste plans, expanded recycling and composting systems that incentivize waste reduction, EPR, and growing the organization’s ReThink Disposable programs in more communities, restaurants and schools around New England. ReThink Disposable is an innovative program that reduces waste and saves businesses and schools money. Together these policy solutions and programs and initiatives will go a long way to reduce the volume of trash generated on the front end and build more sustainable, healthy communities. 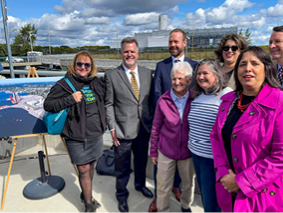 On September 30th 2021, Salem Mayor Kim Driscoll, Senator Joan Lovely, and Representative Paul Tucker announced plans to make Salem Harbor a “world class offshore wind port” and usher in a new era of maritime wind development as part of a big commitment to shift away from fossil fuels. Clean Water Action Regional Director Cindy Luppi and grassroots partners from Salem Alliance for the Environment (SAFE) applauded the step forward and were on hand to celebrate the big news. SAFE co-chair Pat Gozemba said “There were mountains of coal piled up for years, with coal dust blowing through our neighborhoods. There is some ironic justice in having the offshore wind industry become the force that will revitalize that area.”

Helping reduce the energy burden for those who need it most

Connecticut established bold goals to reduce greenhouse gas emissions including 100% clean electricity by 2040. A critical piece requires reducing energy demand by ramping up energy efficiency. Energy efficiency measures include sealing up leaks, installing energy efficient electric appliances and lighting, and shifting to electric sources of heating and cooling. These initiatives reduce consumption of energy derived from fossil fuels, reduce carbon emissions and make homes more comfortable and affordable for many lower income residents. Since buildings account for about a third of our energy use — and therefore greenhouse gas emissions — making buildings more efficient has a significant impact in reducing overall energy demand, particularly during periods of extreme cold or heat.

Clean Water Action in CT has worked to promote ramping up energy efficiency in homes for many years. Despite the Utilities energy efficiency programs, we are still far away from meeting the state goal of 80% of homes weatherized (more energy efficient). Residents in communities of color or low/moderate income areas are the least likely to have been serviced — and often have higher energy costs.

Finally, after years of advocating for funding support to assist the Utilities with outreach to low-income communities and communities of color, CT’s Energy Efficiency Board have agreed to partner with NGOs and community groups to ramp up energy efficiency. Clean Water Action has partnered with local partners in Waterbury — a distressed, urban city — to get at least a 10% increase in residents participating in these no-cost or low-cost services.

These types of partnerships will go a long way to reduce energy burden and improve the safety and comfort of homes for those that need it most. We’re excited to get to work!

Next steps to protect public health and the environment

Connecticut became a national leader when we passed our priority PFAS (per and polyfluoroalkyl substances) bill this year. The bill restricts two major sources of contamination: firefighting foam and food packaging. We’re proud to have led these efforts in collaboration with legislators and state agency officials. The Department of Energy and Environmental Protection is implementing a takeback program of the toxic foam and replacing it with a fluorine-free foam that is effective and safer for public health and the environment. This also helps so many of our local fire departments that don’t have the dollars or resources to do this safely. Food packaging containing PFAS will be banned as of 2023.

Despite this significant win, there is much more to do! The US Environmental Protection Agency (EPA) identified more than 120,000 locations around the US where people may be exposed to this class of toxic “forever chemicals” associated with various cancers and other health problems that is a frightening tally four times larger than previously reported, according to data obtained by The Guardian.

On October 19 EPA announced the PFAS Roadmap. It’s a good step in the right direction, but Clean Water Action (and many other allies) believe it doesn’t go far enough!

States must continue to lead! In Connecticut, we’re working collaboratively with agency officials and policy makers to support and fund expanded monitoring of at-risk sites, push for more restrictions on products sold in the state that contain PFAS (such as textiles), working with state and municipal officials to assure that procurement contracts restrict products with PFAS, and pushing for a strong, health-protective drinking water standard.

All of these efforts, along with our work at the federal level, will go a long way to reduce harms from this class of toxic forever chemicals in our environment.

The Road to Net-Zero Emission Buildings in Boston 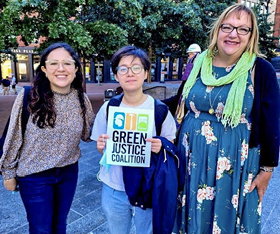 October 6th, 2021, the Building Emissions Reduction and Disclosure Ordinance became law after a unanimous vote from the Boston City Council. BERDO 2.0. requires the largest buildings in Boston meet increasingly aggressive emissions targets over time — with no carbon offset options — to get these buildings to zero carbon performance by 2050. The ordinance is also designed to have communities actively contribute to the implementation via the review board. With two-thirds community representation, the review board will oversee the implementation of the emissions standards, along with the Equitable Emissions Investment Fund. As a result, BERDO 2.0 will ensure that the residents most impacted by climate change have a say in their communities and opportunities for making change.

BERDO 2.0. is a bold step and will help the city to reduce its carbon footprint. However, what makes it a massive win for local climate activists and Bostonians is the focus on engaging communities and centering the priorities and concerns of frontline residents. With a community-centered ordinance, Boston Climate Action Network (BCAN), in coalition with Community Labor United (CLU), Clean Water Action, the Sierra Club, Alternatives for Community and Environment (ACE), and Chinese Progressive Association (CPA), gathered nearly 2,000 signatures in favor of expediting the ordinance and hosted a signature drop off event at City Hall two days before the unanimous vote from the Boston City Council.

The city and stakeholders took the necessary steps throughout the policy development process to streamline communication work with frontline communities to ensure they were informed and could participate with ease. For example, fellow organizers from ACE, CPA, CLU, BCAN, and New England United for Justice communicated via grassroots organizations rather than the usual city channels. The city also communicated with frontline residents by mapping multifamily buildings impacted by the ordinance, identifying affected districts, and contacting active community partners. Additionally, outreach materials were multilingual, with workshops held in up to five languages and accessible, with local artists bringing complex policies to life. Attendees in these workshops were compensated for their time, expertise, and lived experience.

This summer, Green Justice Coalition members, including Clean Water Action, met with Boston City Councilors to emphasize the importance of having an equitable ordinance with a review board with two-thirds of members being community stakeholders. In addition, they brought to light the current asthma crisis that people in Black, indigenous, and people of color communities struggle with in Massachusetts and demanded that offsets not be an allowed option.

Equity and energy efficiency are two of Clean Water Action’s top priorities. Let this win remind us that we should continue to center equity and justice in our goals towards sustainability. 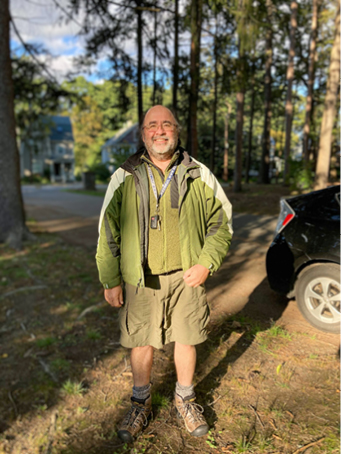 Steve Turner joined the Clean Water Action Northampton Field Canvass in 1987, the beginning of a 33-year commitment to knocking on doors every day to get more people involved in the fight for the planet, before he retired last year. While some of Steve’s impact is quantifiable — recruiting 66,000 members, collecting 13,200 letters to legislators, and raising $1.2 million for Clean Water Action and Clean Water Fund — much of it is not. Steve’s commitment, humility, and warm nature had a huge impact on everyone who was lucky enough to work with him during his 30+ tenure. Massachusetts Associate Director, Maureo Fernández y Mora, who worked with Steve in the canvass said, “The lessons that Steve taught me about accepting life as it happens to present itself that day, and trusting that a better future is just around the corner, has made me a better person and a better organizer. Steve, you’ve left this place better than you found it.” Thank you from all of us! 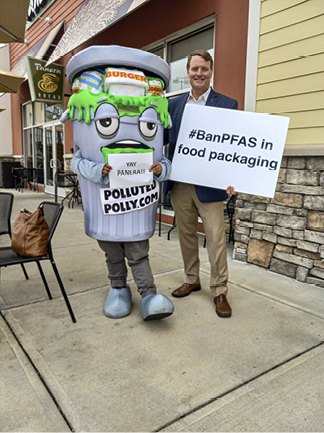 Polluted Polly is traveling the country to let people know that PFAS in food packaging is downright yucky. Senator Michael Moore, from Millbury, agrees. That’s why he has filed Massachusetts bill S.1494 to ban toxic PFAS chemicals from food packaging.