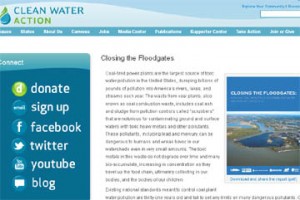 No Excuse for Water Pollution

I have worked on water issues for a long time, so I don’t expect surprises about pollution sources.  But that’s what I got when we began to see the facts on water pollution from our nation’s power plants, especially coal plants.  It turns out that power plants are the largest point source of water pollution and that they are responsible for over half the toxic discharges to water.

Today, we worked with allies to release Closing the Floodgates: How the Coal Industry Is Poisoning Our Water and How We Can Stop It, a report which outlines this problem and makes the case for a strong Clean Water Act program to eliminate this toxic pollution. Winning such a strong program is a priority campaign for Clean Water Action this summer and you can learn more and take action here.

Three aspects of this report struck me in particular.  First, the majority of these discharges, including heavy metals which can cause everything from cancer to impaired brain function, are completely uncontrolled.  Second, given that so much of my own work focuses on drinking water, I was stunned to see the findings on arsenic, selenium and bromide going into our rivers, lakes and streams.  For different reasons, these are three of the contaminants from power plants which have caused serious concerns for drinking water quality.  When we work on drinking water, one of our first questions is always whether this contaminant could be kept out of our drinking water sources in the first place.  The Clean Water Act answers that question quite well, in theory.  It requires the Environmental Protection Agency (EPA) to identify the “Best Available Technology” for reducing or eliminating pollution from specific sources, and in the case of coal plants – responsible for most of the water pollution from the power plant sector – such technology exists.  Some coal plants are using it. But powerful special interests have stymied development of limits on this pollution for over thirty years.  The findings of Closing the Floodgates are the results of that delay, and it’s an inexcusable one. There is no justification for letting coal plants use our rivers, lakes and streams – often our sources of drinking water – as a dumping ground. 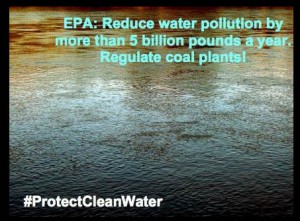 Third, I was stunned by the report’s analysis of changes made to EPA’s proposed “Effluent Limitations Guidelines and Standards for the Steam Electric Power Generating Point Source Category” by staff at the White House’s Office of Management and Budget/Office of Information and Regulatory Affairs (OMB/OIRA).  Working on federal policy means learning to understand the art of compromise, but the Clean Water Act does not provide for non-scientists who do not specialize in Clean Water Act implementation or in water quality issues options to develop options out of whole cloth to appease special interests. And it seems like that is what happened here. That’s inexcusable too.

Clean Water Action is working to make sure that the final EPA decision in this case is to require power plants to use accessible and affordable technology to control their pollution.  It’s what the Clean Water Act requires, it’s essential for protecting our drinking water sources and it’s what the American people expect.  In fact, they would be stunned if EPA chose to do otherwise.

You can let EPA know what you think by weighing in during the public comment period on this regulatory effort.