California is the only state to date to regulate 1,2,3 trichloropropane (TCP) in drinking water.  Because of its serious health impacts, the standard for TCP is 5 parts per billion (ppb), which is the level at which the chemical can be reliably detected in water.    Dozens of water systems have successfully sued the two mega-companies that caused contamination in the state’s water – Dow Chemical and Shell -  in order to recoup treatment costs.  At the same time, corporate attempts to challenge the standard in court have failed.

A tragedy that could have been avoided

In the 1940s, the agricultural divisions of Dow Chemical and Shell started selling two soil fumigants under the trade names of D-D and Telone to help farmers manage crop damaging nematodes. Because pesticides are meant to kill living organisms, they are by their nature, toxic. However, the TCP in D-D and Telone was particularly toxic to humans and persistent in the environment.

Ironically, TCP was not the ingredient that killed the nematodes. It was instead a contaminant that occurred in the manufacture of the fumigants. While it was easily removable before the products went to market, Dow and Shell chose instead to leave it in and simply – and deceptively– register it as an “active” ingredient. In other words, they falsely claimed that the contaminant was necessary to the effectiveness of their products despite having scientific evidence that the chemical was dangerous to humans.

TCP was banned in soil fumigants in the 1990s. By this time D-D had been taken off the market and Telone was reformulated. However, because the chemical does not bind to soil or break down easily in the environment, much of it had leached into groundwater over the decades and contaminated drinking water wells. Thousands of Californians were drinking and cooking with TCP just because two companies – who knew it was both dangerous and unnecessary to their product – simply didn’t bother to remove it.

Because TCP containing fumigants were extensively used in California, particularly in Kern, Tulare, and Fresno Counties, contamination of drinking water wells became widespread in those parts of the state.

In 1999, TCP was added to the list of chemicals known to the State of California to cause cancer (Prop. 65). Exposure can occur from drinking or cooking with TCP-contaminated water and from inhaling its steam (such as while showering or washing dishes). Exposure may possibly occur from dermal contact as well. Contact with very high concentrations of TCP may irritate or burn the skin, nose, eyes, or throat, and it may cause drowsiness or liver damage. At this stage, it appears that TCP is unlikely to become concentrated in food, such as plants and fish.

In 2009, the Office of Environmental Health Hazard Assessment adopted a Public Health Goal for TCP in drinking water of .0007 parts per billion (ppb) -- one of the most stringent ever established in the state – because of studies showing it to be extremely toxic at low levels. A Public Health Goal is the level in water at which no significant public health impacts are expected. It is not an enforceable standard.

How Big Is the Problem?

Through 2013, detections of 1,2,3-TCP in two or more samples were reported in 372 active and standby sources, belonging to 92 water systems in 17 counties. With the standard in place now , public water systems with levels of the chemical exceeding 5 ppb must treat the water.  Sadly, this does not protect people in affected areas who rely on private wells that may be contaminated, though the state Attorney General’s office is exploring possible legal avenues to ensure that Dow and Shell provide some financial help to such communities.

This map was produced by KQED, drawing on information from the State Water Resources Control Board. It shows water systems where significant levels of the 123-TCP have been detected in the past. Image courtesy KQED, whose reporter, Sasha Khokha, found her own water supply to be contaminated as part of a story on this issue. 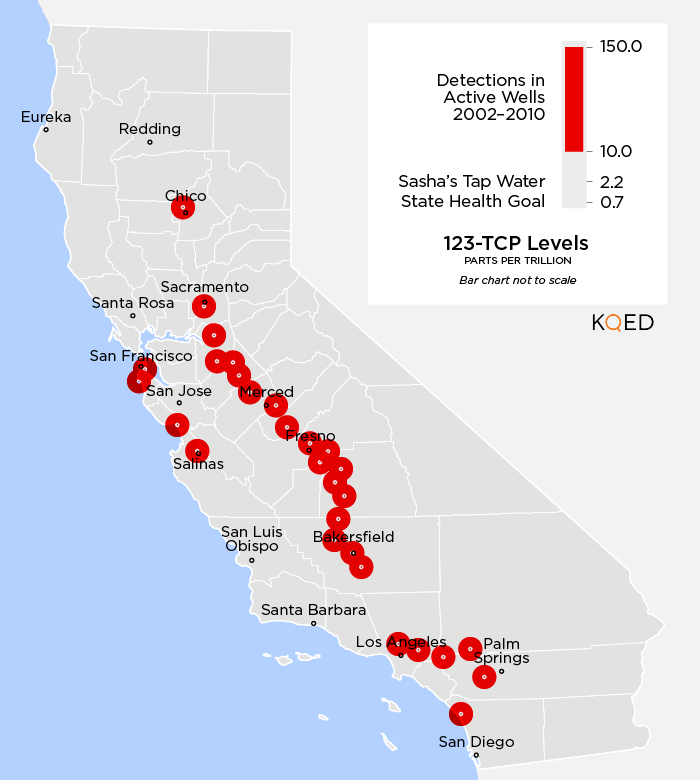