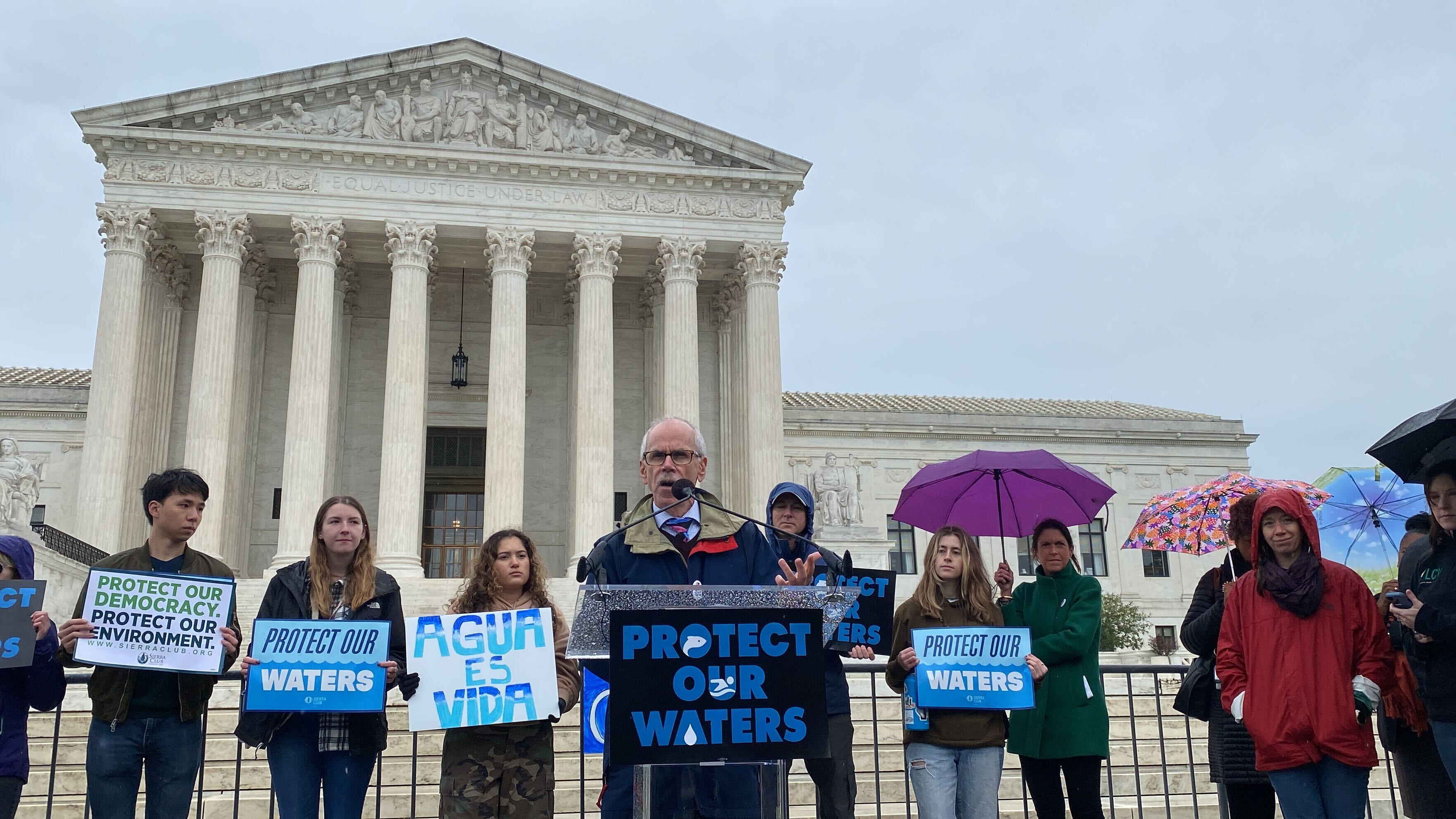 National
Lynn Thorp - National Campaigns Director
@LTCWA
Bob Wendelgass - President and CEO
@BWendelgass
Clean Water Action President Robert Wendelgass spoke at the Protect Our Waters Rally in front of the U.S. Supreme Court in Washington DC on Monday, October 3rd. On the first day of the Supreme Court’s new term, the Justices heard arguments in the Sackett v. U.S. Environmental Protection Agency case. At issue in this case is which waters will or will not be protected by the Clean Water Act. Ensuring that streams, wetlands, and other water bodies are protected has been a priority campaign for Clean Water Action for over twenty years. You can read Bob’s comments below and watch his speech here.
Comments of Robert Wendelgass, Clean Water Action President & CEO
Protect Our Waters Rally - U.S. Supreme Court, Washington DC
October 3, 2022
Good morning.  It’s good to see you all here today to support clean water for all people!
I’m Bob Wendelgass, President and CEO of Clean Water Action. Clean Water Action was formed back in 1972 to lobby for what became the Clean Water Act. We’ve been fighting off attempts to weaken the Act ever since, including the Dirty Water Act pushed by Newt Gingrich in the mid 90’s. On behalf of all our members across the US, I am here today to tell the US Supreme Court to leave the Clean Water Act intact!
Wetlands and streams are essential parts of our country’s natural water infra-structure.  They protect communities from flooding, and they keep pollutants out of our drinking water. A Court ruling in favor of the Sacketts would be a slap in the face to the Clean Water Act’s 50-year legacy.
While all of us benefit from cleaner drinking water sources, only a handful of polluters will benefit from a free pass to destroy streams and wetlands. The rest of us will be losers.
We’ll lose because the rivers, streams and lakes that we use for swimming, fishing or boating will be dirtier. Wetlands and small streams filter out the nutrients that could cause the algae in our waterways to grow out of control. Polluters will win, but the rest of us will lose.
We’ll lose because our drinking water sources will be more polluted. Millions of people get their drinking water from rivers or lakes that are fed by small streams and protected by wetlands…or from groundwater that is protected by wetlands. If the Supreme Court lets polluters destroy these wetlands and small streams, the sources of drinking water for millions of us will be dirtier.
We’ll lose because more people’s homes and communities will be flooded. We know that flooding will get worse as climate change happens. We’ve seen examples of that across the country over the past few years.  So why would we remove one of the natural systems that does a great job of preventing this flooding?  Polluters will win, people whose homes get flooded will lose.
The Supreme Court is getting ready to make a decision that goes against the laws of science and how water works in the real world. The remedy that Sackett and others are pushing is a political action to weaken the Clean Water Act. It ignores the scientific fact that many wetlands and streams are connected underground with no visible connection on the surface. And it will allow the destruction of half of our remaining wetlands and perhaps 20% of our stream miles—both vital to protect our waterways and safeguard our drinking water.
The public gets this is not a good idea.  According to a recent poll, 73% of Americans from all parties—Democrat, Republican and Independent—support a strong Clean Water Act….and 75% support protecting more waters and wetlands under the Act, not fewer.
The people get it—now we need the Supreme Court to hear us. On behalf of the millions of people who value clean drinking water and support a strong Clean Water Act, I urge the Supreme Court to leave the Clean Water Act intact.
The bottom line is clear:  Our communities need clean drinking water more than polluters need bigger profits.
Thank you.
Tags:
#CleanWaterAct, #CleanWater50 #CleanWater