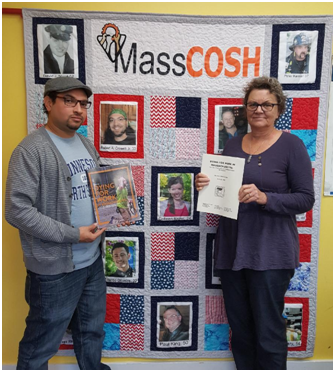 What is your vision of a dream job? One in which you can come home from the job safe every day? Well, Clean Water Action allies at The Massachusetts Coalition for Occupational Safety and Health (MassCOSH) fight for that vision every day for all of us. Clean Water has worked closely with the MASSCOSH team for many years to advance safe chemicals policies and innovations. We hope to prevent harm to worker health rather than mourne for workers who lose their lives on the job  from contact with dangerous chemicals.

MASSCOSH has created a quilt (pictured above) to commemorate the losses of Massachusetts workers who have been killed due to occupational hazards. MASSCOSH staff Tolle Graham (right) and Al Vega (left) hold reports which describe several other preventable workplace incidents in Massachusetts.

Among these reports is the story of a 43 year old Massachusetts contractor. He died while using a common Methylene Chloride (MC) based paint stripper to refinish a bathtub. Though he was wearing protective gear, the powerful chemicals he was using were extremely concentrated and volatile, and the toxic fumes led to his tragic death.

Unfortunately, this is not a singular case. At least 13 other contractors nationwide have died in this way since 2000. MC is regulated as a cancer-causing chemical, but is still commonly found in paint strippers and used in places like small, poorly ventilated residential bathrooms. The EPA projects that roughly 32,000 workers and 1.3 million consumers breathe MC each year during paint and coating removal.

Under the Obama Administration, the EPA attempted an important step to increase public safety.. It’s been almost a year since the EPA proposed bans on two of the most dangerous paint stripper chemicals but none of them were ever finalized. Since then, almost no further action has been taken and new EPA leadership has expressed little interest in correcting this dangerous oversight.

Today, you can help by signing this petition to pressure Scott Pruitt and the EPA to follow through with finalizing and enforcing these regulations. Ban Methylene Chloride paint strippers and protect employers, workers, and consumers today!