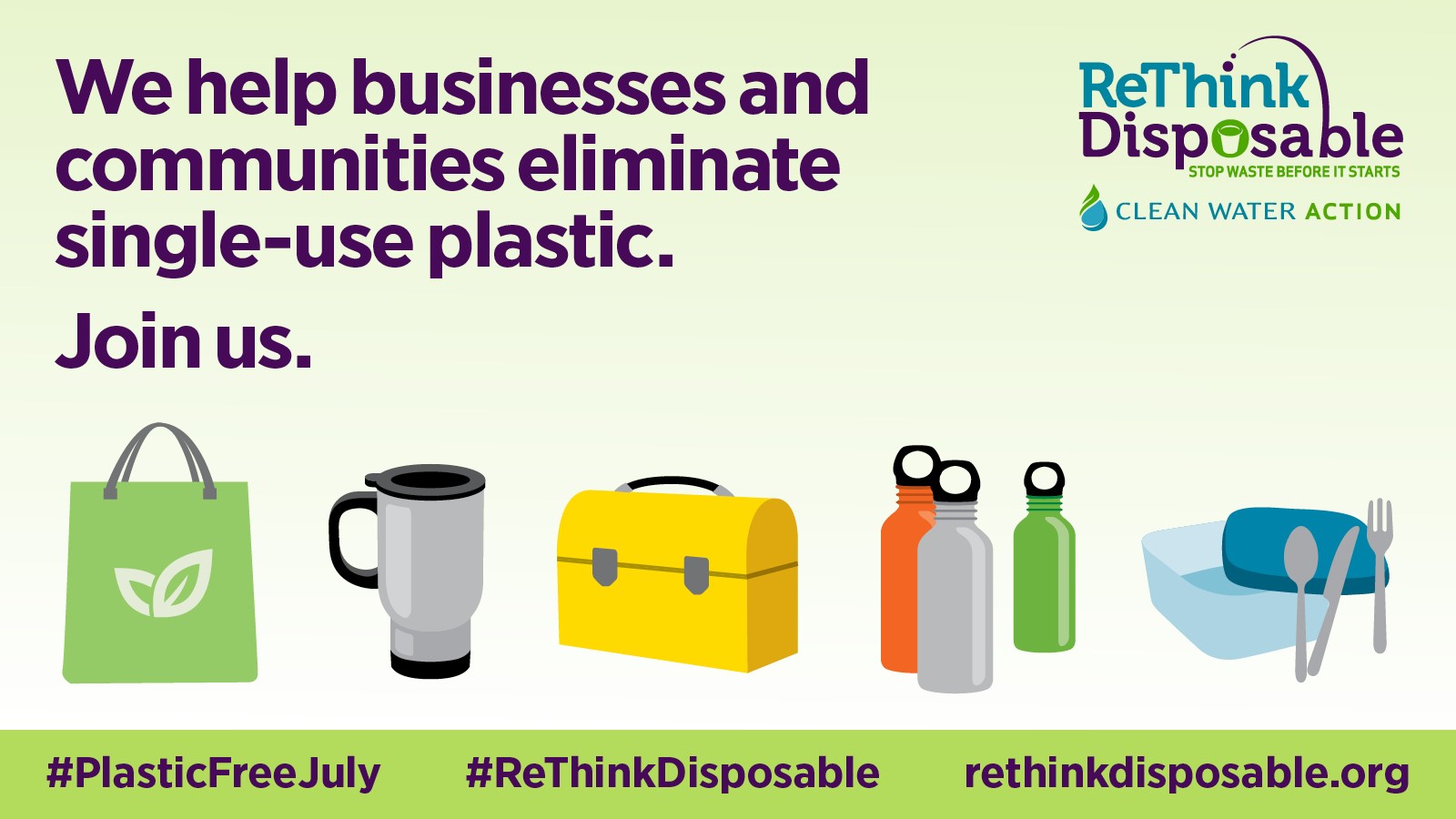 This July, join millions of people around the world reducing their plastic waste. Clean Water Action’s ReThink Disposable program is excited to be part of the solution to plastic pollution – every day we work for cleaner streets, less pollluted oceans, and healthier communities. Join us to ReThink Disposable together by choosing to refuse single-use plastics for Plastic Free July. Together, we can make a difference and be a part of the solution.

At ReThink Disposable, our mission is to prevent waste before it starts. We work with local businesses, government and communities to minimize single use disposable packaging items like plastic cups, bottles, straws, cutlery, plates, bags, and to-go containers.

As an individual, there are so many things you can do to reduce your disposable footprint. We have developed 10 actions to help you ReThink Disposable. For Plastic Free July, make a pledge to continue doing the ones you already do, and choose the new actions you are willing to commit to:

3.      Bring your own food container and utensils.

The tenth action is to inspire others to join the ReThink Disposable movement for Plastic Free July! Check out these awesome social media images you can share all month long - be sure to tag us at #ReThinkDisposable when you do.

By 2050, it’s estimated there will be more plastic than fish in the world’s oceans. Most comes from land and was once in our hands.

Plastic is everywhere, but where does it come from and what are the impacts to our health and environment? Virtually all plastic – 99 percent of it – comes from fossil fuels. That means plastic use leads to more drilling, fracking, and air, water and climate pollution in our communities. A new report by the Center for International Environmental Law (CIEL) concluded that plastics bring toxic or carcinogenic health risks to people at every stage.

People can be sickened not only when plastics are produced, but also while plastic is actively used by consumers and then again after it’s thrown out, where plastic trash often breaks down into smaller and smaller bits that can contaminate the food chain and make its way into people’s bodies.

Every day, kids are exposed to plastic chemicals in toys and drink/food ware. These chemicals are linked to obesity, endocrine system disorders, and developmental problems such as ADHD and lower IQ in children. Plastic chemicals have also been linked to cancer, diabetes, and respiratory and reproductive harm in adults.

It doesn’t look like plastic production will slow down unless we take action. Largely driven by the shale gas rush unleashed by hydraulic fracturing or “fracking,” the industry is pushing for production of more plastic and petrochemical plants. For example, Shell’s $6 billion ethane cracker, a massive petrochemical complex being built in Pennsylvania, will drink up 100,000 barrels a day of the state’s glut of ethane. And each day, the plant will churn out nearly 10 million pounds of polyethylene plastic pellets, a total of roughly 3.5 billion pounds of new plastic a year.

This is just one plant. There are many others planned around the country. Pollution from these plants not only affects air quality and our health (petrochemical plants emit carcinogenic pollutants like Benzene and volatile organic compounds), but they also play a major - and growing - role in climate change.

According to the CIEL report, by 2050, making and disposing of plastics could be responsible for a cumulative 56 gigatons of carbon, up to 14 percent of the world's remaining carbon budget.

In 2019, the plastics industry is on track to release as much greenhouse gas pollution as 189 new coal-fired power plants running year-round, according to the report — and the industry plans to expand so rapidly that by 2030, it will create 1.34 gigatons of climate-changing emissions a year, equal to 295 coal plants.

It’s time to ReThink Disposable, Reduce our Dependence on Plastic and Make Reusable the New Norm

As consumers, it seems we can’t escape plastic…it’s everywhere we look…the shampoo bottles in our shower, our kids’ toys, plastic bags at the grocery store, straws in our drinks, and to-go containers. But working together to ReThink Disposable, we can reduce our dependence on plastic and make reusable the new norm.

If you head to the grocery store, bring reusable bags. Instead of pre-packaged goods and food wrapped in plastic, support local farmers markets where you can buy fresh or buy fresh at the grocery store and bring your own smaller reusable bags for produce and other items. Take your reusable cup with you to your favorite coffee or juice shop. If you plan to get take out or have leftovers, make sure your bag is packed with your own take out containers. Better yet, encourage your favorite restaurant to join Clean Water Action’s ReThink  Disposable program.

We provide free assistance to local businesses that want to reduce disposable food packaging. As a result, they are conserving resources, reducing waste, preventing pollution, and saving money. ReThink Disposable is helping lead a cultural shift towards making “reusable” the new norm. Join us!