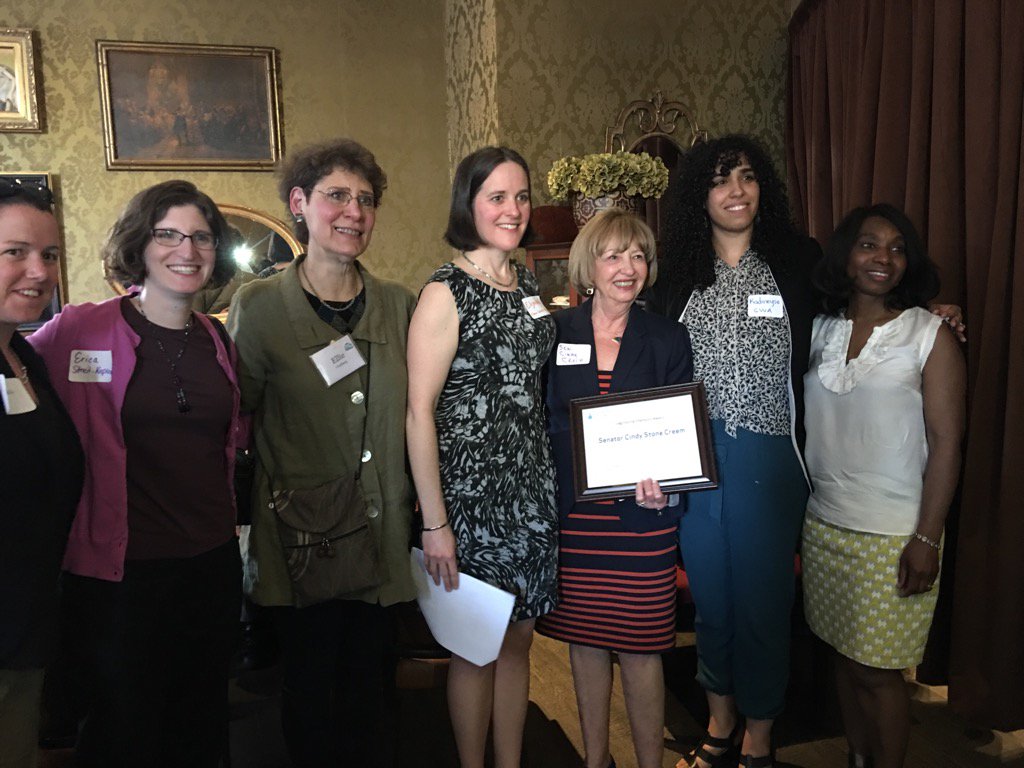 How to Connect and Inspire: Ellie Goldberg

This is the second in a series of interviews with Clean Water Action Massachusetts Advisory Board Members.

Ellie Goldberg has two daughters and lives in Newton. She is focused on environmental health and safety and has a special passion for protecting children. Ellie has been involved with Clean Water Action and the Massachusetts Advisory Board for almost 30 years. She is also a member of Green Newton and Mothers Out Front, is on the board of Alliance for a Healthy Tomorrow (http://www.healthytomorrow.org/), and maintains a blog dedicated to the values and legacy of Rachel Carson, entitled ‘What would Rachel say?’

How did you become interested in working with Clean Water Action?

After graduate school I was a teacher and curriculum writer, but then switched to public health in the mid-1980s as a health educator at the MA Department of Public Health Childhood Lead Poisoning Prevention Program. I became involved in advocacy during  the reauthorization of the MA Lead Poisoning Prevention Act. At that time I also joined the Massachusetts Public Health Association and the American Public Health Association. I met many inspiring people whose aspirations and values aligned  with mine. Later I became involved in community and state groups working to stop the use of pesticides and other toxics reduction projects.

What are some of your current goals and aspirations around your work?

My current goals include advocating for clean energy and sustainability, to speed the transition from fossil fuels and promote environmental justice. I believe that the key to our health security depends on learning to live safely with 21st century chemistry and technology.

Can you tell me about Rachel Carson and the connection between her, your blog, and your motivation?

Rachel Carson’s primary message is that our health is intimately connected to the quality of our environment. Everything is connected. We are part of a dynamic ecosystem. We disrupt those connections at our peril. Carson’s most famous book Silent Spring (1962) warned us about the damage caused by the unbridled use of pesticides. It was a wake-up call for common sense, public integrity, health security and human rights at a time when there were no legal safeguards in place.

“Sing a song of pesticides,

a pocketful of dyes,

“When the pie was opened

the birds began to cry,

"Who has added these poisons

to our precious food supply?"

Sing a song of pesticides,

a pocketful of lies,

When the pie was opened

the birds forgot to sing.

about a Silent Spring?”

You have a special passion for protecting children. How has this influenced your advocacy?

Growing up in the 60s I was always a political activist, but having my own children gave me a heightened sense of urgency about environmental quality. In 1989 I founded www.healthy-kids.info as an advocacy service for students who have asthma and other health conditions, especially those that result from environmental exposures and hazardous conditions. I became a public health advocate because I always believed that we could do better than just seeking individual remedies. We need public policies that create the protections that prevent illnesses and injuries to children and adults. So I give testimony at hearings, participate in rallies and marches, and meet with my legislators, trying to influence our elected decision makers to prioritize public health.

What are some other influences in your work?

I have been inspired by everyone that I’ve worked with at Clean Water Action, Toxics Action Center, Healthy Schools Network, the Alliance for a Healthy Tomorrow, and lots of other community and public health groups throughout the years. On the local level I have worked with Green Newton since the early 1990s to reduce the use of pesticides and promote organic landscaping. We helped pass the Children’s and Families’ Protection Act in 2000.

It’s these long term connections to dedicated people that preserves my sanity no matter how bad the news gets. My formula for effective advocacy is “Show up! Stand up! Speak up! Team up!”

What is the most powerful tool you utilize in your work?

The internet is essential for research and staying in touch with people, near and far. Having access to the latest science is incredibly important. Luckily, it is so much easier now than before the internet. I want to be informed and then I curate the information and share it so that others can use it.  As a writer, I translate technical scientific reports to  create articles and stories that motivate action, especially advocacy for air quality, water quality, clean energy, and school safety

What have you learned from the work you do?

It is very important to stay connected to people and to have heroes who show what can be done.  Again, my friends and colleagues really save my sanity. When you’re in public health you’re in it for the long term. The policy making and legislative process take a long time. You are constantly defending your public interest goals against those who are working for special private interests.

Also, I tell myself that I can't do everything but I can always do something. We all live downstream but we also all live upstream. That means we are responsible. My hero Rachel Carson had an incredible reverence for life and heightened sense of responsibility. She persisted in spite of serious illness and adversity and an orchestrated chemical industry campaign to discredit her. Her strength and courage is a constant source of inspiration to me.