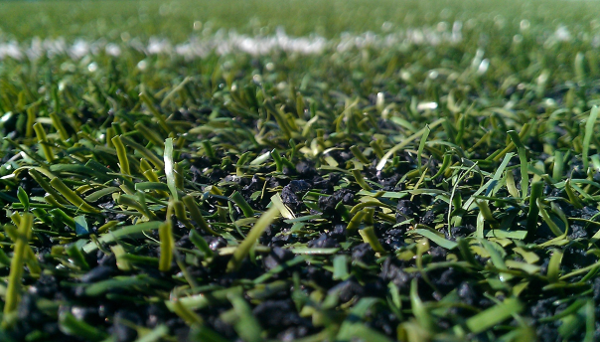 This guest blog by Louis W. Burch, CT Program Director, Citizens Campaign for the Environment, covers the health risks from exposure to recycled tire rubber. Clean Water Action and Citizens Campaign for the Environment are both members of Coalition for Safe and Healthy CT, which has worked to on state-wide bans of artificial turf made with recycled tires for several years without success. Misunderstanding on the health impacts of exposure to chemicals in turf remains a big problem.

There is growing concern in the U.S. and around the world over potential human health hazards related to the use and prolonged exposure to recycled tire rubber (also known as “tire crumb” or “crumb rubber”). Multiple studies have identified toxic chemicals in that rubber, including heavy metals, Volatile Organic Compounds (VOC’s), and several known or suspected carcinogens. Despite this, a booming, multi-million dollar industry has continued to grow up around the use of these materials, not just on athletic fields, but on children’s playgrounds as well.

According to the Synthetic Turf Council, there are currently between 12,000-13,000 synthetic turf systems in use across the United States, with anywhere from 1,200 – 1,500 new fields being installed each year. Developers, surfacing manufacturers, and rubber recyclers have aggressively promoted the use of such systems for indoor and outdoor athletic facilities, in addition to their use as protective surfacing under public playscapes. These industries have worked together to market these crumb rubber surfaces as a “safe alternative to natural grass,” but a health experts and athletics professionals alike have both challenged such claims.

Amy Griffin, women’s soccer coach at the University of Washington, was one of those athletics professionals. In 2014, she began documenting an apparent trend of soccer players (particularly goalkeepers) developing rare blood cancers (including leukemia and lymphoma) after years of playing on crumb-rubber fields. To date, Coach Griffin has compiled the names of more than 200 women’s soccer players who had developed these cancers. After investigating, the Washington State Department of Public Health published a report in early 2017, which suggested there was no cause for alarm. But Washington State was not the first state to come down on the side of the turf manufacturers. Our own home state of Connecticut made a similar determination back in 2007.

So where is the disconnect? If research shows that crumb rubber contains toxic materials, how is it possible for a state-run public health agency to call that product safe? Perhaps it has something to do with the limited scope of those investigations. Causal relationships are very complex and difficult to prove absent a thorough comparison of similar populations using a test and control group over time. And that’s just not something that states have the time or resources to do these days.

This is a reality that the industry has exploited, with considerable success. A new report released by Environment & Human Health, Inc., details how crumb rubber manufacturers have gone to great lengths to twist the truth; referencing real, peer-reviewed studies in statements arguing their products are safe. In truth, many of the very studies the industry has pointed to in recent years actually identified numerous toxic and carcinogenic chemicals in crumb rubber.

Fourteen of the 22 studies reviewed found varying levels of lead in those fields, and one of them tested actually had lead levels 500-1,000 times higher than that of other fields. These elevated lead levels alone make it impossible to characterize these materials as “safe” or “risk-free”. And yet, new fields continue to be installed for use on youth sports facilities and public playgrounds, which are primarily used by small children. Children are uniquely vulnerable to toxic health exposures in their environment due to their small size, rapidly developing bodies, and frequent hand-to-mouth activities. In theory, this makes public playgrounds and grade-school athletic fields an obvious place to prohibit the use of this material.

In the science world, the “precautionary principle” dictates that if a product raises threats of harm to the environment or human health, precautionary measures should be taken even if cause and effect relationships are not fully established scientifically. With clear scientific evidence available that shredded tires contain hazardous materials, their use on school grounds, public playgrounds and other facilities should be avoided, especially in areas where small children can be found. Unfortunately, this common-sense approach has been all but overlooked.

So how did this happen? The truth is, our communities have been the victims of a well-funded, industry-sponsored campaign of misinformation directed at the public and policymakers alike. Those that manufacture these products are well aware of the toxic constituents they contain, and they knowingly distort the truth to help ensure that lawmakers do nothing address this emerging health hazard. These industries have cast a shadow of doubt over the available science. As a result, thousands of municipalities and school systems across the country have been duped into investing millions on crumb rubber fields, with little understanding about the true health concerns related to their use.

Despite what the turf manufacturers want us to believe, the science on crumb rubber is alarming, to say the least. What is needed is a comprehensive, independent review of the available science, to determine once and for all the true potential for a cause-and-effect relationship between crumb rubber and the adverse health impacts we are seeing among women’s soccer players. Many in the advocacy world were encouraged when Congress ordered the U.S. Consumer Product Safety Commission and U.S. Environmental Protection Agency to collaborate on such a health assessment in 2015. Unfortunately, but perhaps not surprisingly, that process has faced significant delays under President Trump’s administration. To date, the inter-agency health assessment is still ongoing with no definite end in sight.

With our federal regulators asleep at the wheel, it is up to the non-profit community to take on the responsibility of identifying the health hazards of crumb rubber, and informing the public. The challenge ahead of us is to educate our communities on this emerging health threat, empower them to stand up to the turf companies, and demand a higher standard of protection for our children. I'm glad that Citizens Campaign for the Environment, and the Coalition for a Safe and Healthy CT is working on this issue. With knowledge comes the responsibility to act. The more the public knows the concerns about crumb rubber, the more difficult it will be for industry to defend its use.