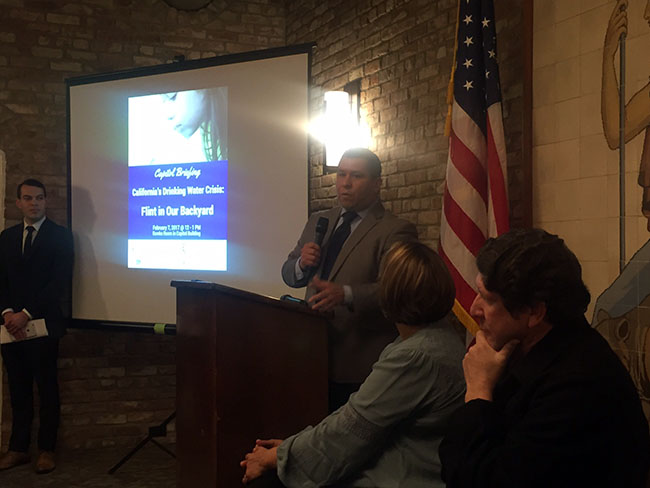 120 people showed for our Capitol briefing in partnership with the AGUA Coalition, Community Water Center and our other allies at The Leadership Counsel for Accountability on access to safe and affordable drinking water this afternoon.

The goal of the meeting was for residents of some of the 300 California communities with unsafe drinking water to talk about what the problem is: Flint in our back yard. There are more residents in California whose drinking water standards are failing than the entire population of Flint, Michigan.

Take action here now to call on the state to fund safe drinking water for all.

“You can’t turn your faucet on and drink it. We’re paying $60 to $120 a month for water we can’t drink. The only thing you can do is bathe in it and flush it down the toilet,” said Becky Quintana, a resident of Seville, California. “In our school we’re having to bring in porta-potties because we’re running out of water. We shouldn’t have to close the school for health problems. Seville is like a Flint, Michigan. We really need to take care of this issue before it’s put out there into the world about what it’s really like here.”

“Our first well got contaminated in 1990, the second in 1993, and the final one in 2003. They found not only just nitrates, but also TCP. We had to prove to the county that people were getting sick, having rashes and red eyes, from the water,” said Horacio  Anezquita, a farmer and resident of San Jerardo.

“You hear Coachella, you think of the festival. But you look at the families who live there, they have issues with wells which are failing,” said Mariela Magana, from the Leadership Council for Justice and Accountability, who grew up in Coachella.

Senator Eduardo Garcia, chair of the Senate Water, Parks and Wildlife Committee, who represents Coachella, told the crowd: “We have to be mindful of the costs, but also putting forward the public health interests of the people we represent.”

Strong majorities of Californians are willing to pay as much as four dollars a month on their water bill to fix unsafe levels of drinking water contamination, according to polling by Fairbank, Maslin, Maulin, Metz & Associates, who recently conducted phone interviews with 1,000 California voters to assess their views on threats to drinking water.

81% of Californians are familiar with water contamination problems in Flint, Michigan, which first came to light nationally more than two years ago.

Take action here now to call on the state to fund safe drinking water for all.

The briefing precedes a briefing tomorrow, Wednesday, February 8, hosted by the State Water Resources Control Board to present important, newsworthy new data on opportunities to secure safe and affordable drinking water for all Californians.