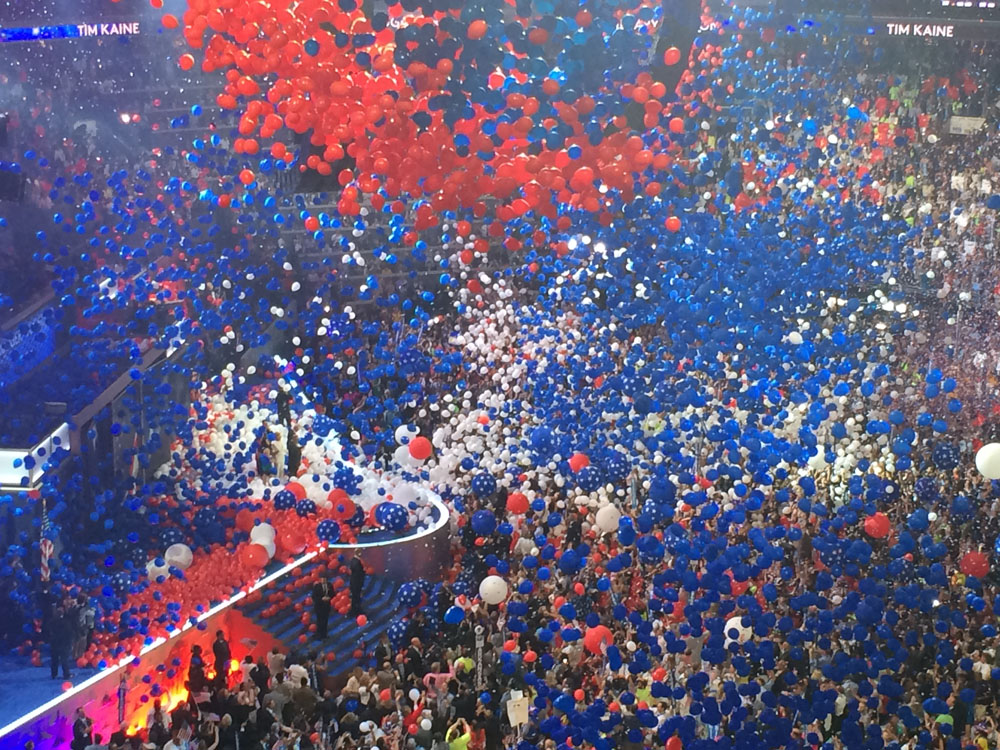 Balloons. So Many Balloons. My Time at the DNC in Philly

Last week I witnessed Hillary Clinton became the first woman from either major political party be nominated for President of the United States. Not bad for my first time attending a party convention.

The 4 days in Philadelphia were long and the consistent 90 degree temperatures made them feel even longer at times. The days traditionally started at 9am with a breakfast in one of the hotel ballrooms exclusively for Pennsylvania attendees.  The people there were federal, state, and local elected officials from across the Commonwealth, candidates, members of the LGBTQ community, environmentalists, union representatives, Bernie delegates, Hillary delegates, and diehard Democrats. It was a great group of activists and extraordinary opportunity to network and find out how we can all work together. The breakfasts were highlighted by speakers from Pennsylvania, like Governor Tom Wolf and Pittsburgh Mayor Bill Peduto as well as national figures like New Jersey Senator Corey Booker and Minnesota Senator Amy Klobuchar.

The afternoons were full of receptions and educational events. The topics were diverse and included everything from inspiring women leaders, to anti-Semitism, to rethinking crime and punishment. Blue Green Alliance and Next Gen Climate sponsored receptions on the environment.

The convention gaveled into session at 4:00pm and went until 11:00pm (For the “night owls”, there were numerous daily post convention parties to choose from that lasted into the early morning).

As you might have seen on TV, there were a lot of speakers discussing almost everything. The speeches were broken up by videos about Hillary’s life and policy positions as well as a few attacking Donald Trump. Most of the speakers were extremely inspiring and motivating, particularly those in the primetime slots.

The energy generated in the arena by First Lady Michelle Obama, President Obama, Vice President Biden, former President Clinton, Senator Elizabeth Warren, and Hillary was incredible and those speeches lingered in subsequent days and conversations with other convention attendees. Rev. William Barber delivered a speech about the need to revive the heart of democracy. It might not have gotten a lot of attention outside the convention but really brought the house down.

I imagine the daily routine I experienced is not too dissimilar to what occurs at the RNC. However, what was noticeably different to me about the convention I witnessed in person compared to the one I watched on TV was the attention given to addressing environmental issues, especially climate change.

It started on day one when Congressman Elijah Cummings from Maryland presented the Democratic platform to be voted on by the delegates. The platform features an environmental section which includes provisions that climate change is an urgent threat and a defining challenge of our time, that America must run entirely on clean energy by mid-century, and that clean air and clean water are basic rights of all Americans.

Many speakers over the next four days spoke about these and other environmental issues in their speeches  - and they hit Donald Trump for his comments that climate change is a hoax concocted by the Chinese.

During part of the primetime slot Wednesday night the environment was the focus.  Flint Mayor Karen Weaver talked lead poising as a national issue and California Governor Jerry Brown discussed the need for a clean energy revolution and pointed out that California has strong climate laws as well as a growing economy.

The most compelling environmental message though was delivered through a short film by James Cameron that was introduced and narrated by actress Sigourney Weaver. The film was about people’s lives here in America that have been negatively impacted due to climate change.

Attending the convention was unique and historical experience. Being around people of different races, genders, religions and ethnicities from all across the country but that are united behind a common vision for our country creates a sense of unity and energy that is often tough to capture when you’re watching it on TV. At its most basic level attending the convention allowed me to view our democracy at work from a new perspective.

Now I'm ready to transition the energy I built up during this experience into working to elect environmental champions. Want to join me? Find out how here.