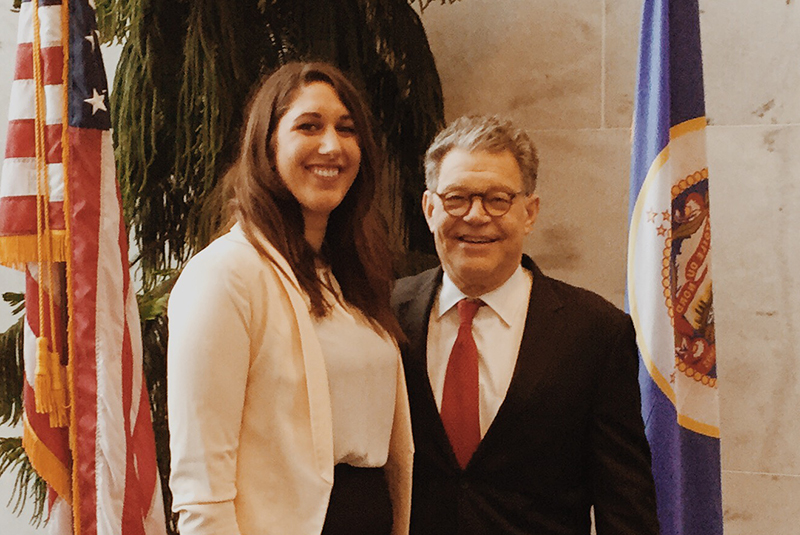 My First Lobbying Experience: A Report from D.C.

I recently had the opportunity to travel to Washington, D.C. to talk to Minnesota legislators about Great Lakes protection.

Every year, the Healing Our Waters (HOW) Coalition organizes a Great Lakes Day at the Capitol. This annual event includes environmental groups from the Great Lakes region.

I was very nervous for this trip because I had never lobbied before. Though I have set up meetings for hundreds of people with their legislators, prepared materials, and helped with turnout for lobby events, I have never actually participated myself. As the woman behind the scenes, I have often spent my time and resources allowing others to participate. That said, I was quite nervous at the prospect of doing the talking.

We spent the first day of the trip prepping for our time on the hill. This training was particularly helpful because they were able to give us up-to-date background information and reiterate the main talking points for all states. One of the cool aspects of this coalition is that it is made up of a variety of organizations, all with quite different objectives. The neat thing is that even with a diverse set of groups, we all have a stake in restoring and protecting our Great Lakes. We also had the chance to get to know the other people from our individual states which helped build our camaraderie.

Day two was the big event for us. We began by attending the weekly breakfast at Senator Klobuchar’s office. We got to speak with the senator, and followed the breakfast with an in depth meeting with one of her staff members. The day consisted of eight meetings with congressional staff in all the different office buildings. There was a lot of walking and it was certainly helpful to be with people who knew their way around. The day was exhilarating, exhausting, and I learned a lot.

Here are a few lessons I took away from this experience:

Teams are awesome. Especially as an inexperienced lobbyist, it was very comforting to have a strong and knowledgeable team to work with. They were able to seamlessly answer questions that I didn’t know the answer to and add any important points I may have left out.

2.    Practice with your group

My team consisted mostly of people who had worked together before, so each of us had some familiarity with each other’s areas of expertise. This was helpful when dividing up talking points. We were able to run through everything beforehand which helped reduce awkward silences. That said, it still took us until the third meeting to really find our groove. Most people who lobby do not have eight meetings in one day (nor would I recommend it as it was quite draining), so it is important to practice ahead of time to make sure you make the best of your limited time with the elected official.

3.    Pick an issue you are passionate about

Most of the congressional staff did not have many questions. They listened and took notes, but I never felt challenged by what I said. Even with the offices that opposed Great Lakes funding, the staff was still polite and listened to the information I provided. It is important to do some research and be confident about your main talking points, but it is okay to say you don’t know the answer if you don’t. Plus it gives you the opportunity to follow up with the staff later when you have the answer.

Most of the staff was very appreciative that we came to share the information. Even if they didn’t agree with our policies, they all thanked us for coming. One of the most important jobs an elected official has is to listen to their constituents. If the elected official isn’t hearing from you, they will need to make assumptions about what you want, and that is never good. One piece of wisdom I always come back to is, “the world is run by those who show up” – so show up, be present, and fight for what you believe in.

I glanced out the window as I flew over Lake Michigan on my connecting flight home from Chicago and it was a good reminder of my purpose on this trip and why I was going through all this effort to protect these beautiful lakes. The mild winter made it easy to see the sandy shoreline cut across the landscape bordering the beautiful blue of Lake Michigan on that sunny day. I like to think that my effort in DC earlier that week will contribute to keeping that area beautiful for years to come.